This summer I have developed a new exercise for the Robotics Academy at the JdeRobot organization called “Amazon Warehouse”. Its main aim is to help students learn to program a robot which autonomously localizes itself, navigates, detects pallets, picks, navigates with a pallet on it, and delivers it to the destination. Additionally, students will learn to work with Robot Operating System (ROS), popular ROS packages, and Gazebo. 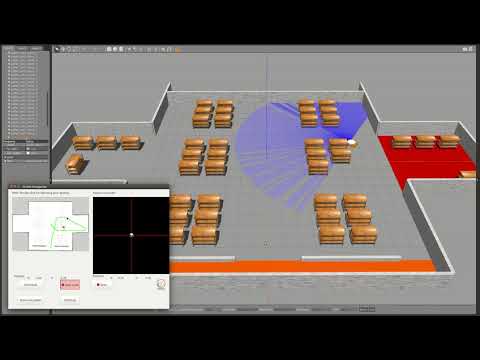 Thanks to the last year’s GSoC participant at the JdeRobot, who have already developed neccessary infrastucture for the exercise (Gazebo world, robot model), I was more focused on programming robot model itself, connecting required packages, configuring parameters for ROS nodes, and fixing problem with main robot controller.

Here are the main tasks that been completed:

Additionally, as there was some time left, we decided to start development of the second version of the exercise, where robot also will have to avoid dynamic obstacles, and in particular, other amazon robots operating the warehouse. Although I did not have enough time to implement this idea, in the final version of the exercise I actually made an updates so that it will be much easier in the future add more robots to the warehouse without any problems with ROS node namings, topics, and services.

During whole period I was mostly working on the The Robotics Club repository, where I and my mentors kept track of all the progress:

However, all final work should be accessed directly at the JdeRobot/RoboticsAcademy repository. The exercise itslef, with all required files and instructions is below:

There were 3 major pull requests to the repository:

Additionally, two PRs where made to the JdeRobot/assets repository:

Moreover, although JdeRobot organization is only starting to use GitHub pages for their official web pages, I made an update to the Robotics Academy’s website to include information about Amazon Warehouse exercise, simple result expectations, and reference solution:

To download exercise and launch exercise, one should first refer to the installation guide

0.Add following packages if you don’t have them already:

3.Navigate to exercise folder and run the practice and the user interface:

Further information and API commands are available in the exercise README